Buzzcocks: the power-pop and the glory 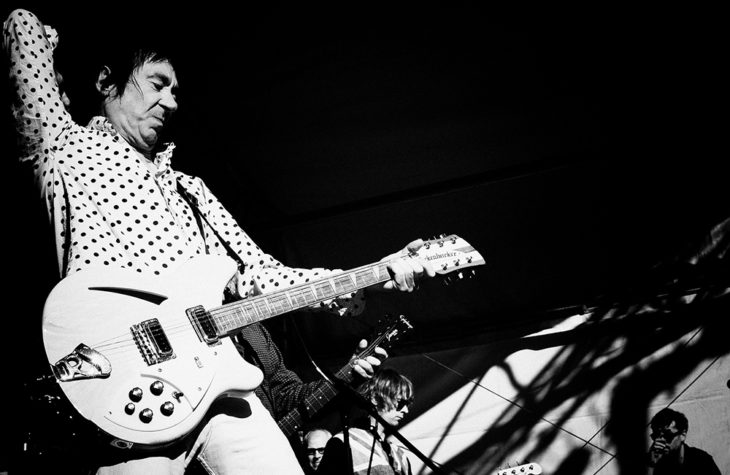 Buzzcocks: the power-pop and the glory

I can clear up the great ‘Who invented punk?’ debate, and the related question of whether it happened in London or New York City. America had the Stooges and the Velvets, the Seeds, ? and The Mysterions, the 13th Floor Elevators and all those Pebbles and Nuggets garage bands. But that was only after Britain had given the gift of the Kinks, the Troggs and the Who. So the punk sound was invented either deliberately by Shel Talmy, the American who produced the Kinks and Who, or accidentally by the Troggs, who looked and sounded like agriculturalists from the Stonehenge area.

What about punk style? Well, there was the New York Dolls. But weren’t they just the Stones with more lipstick? The Ramones, however, were fast and funny. They released their debut album in April 1976, though they had been rehearsing the same set since about 1962. But what about Dr Feelgood? They were also fast and funny, and released their debut album in 1974, when the Ramones were still in rehearsal. The debate is older than time; older, even, than the average reader of Mojo magazine.

What we can agree on is England’s division of punk labor. John Lydon, the Can fan, reggae connoisseur and former green-haired Hawkwind head, was the visionary. Joe Strummer and his comrade in arms Mick Jones were the political generals. Stuart Goddard — soon to become Adam Ant — was John the Baptist. Steve Jones and Paul Cook were the muscle. John Simon Richie, known forever as Sid Vicious, was the martyr. Howard Trafford was the seer. There was, however, only one genius in town. His name was Pete McNeish, and his town was Bolton, Lancashire.

You have to search high and low for a genius. It is unlikely that you will find one in famous public schools like Eton or Westminster. But if you went to Bolton Technical College in 1975, you would have stumbled upon Pete McNeish and his friend Howard Trafford. That year, the two of them formed Buzzcocks. In 1975, they were only two ‘punks’ in the northwest of England. With a precocious vision and the certainty of youth they had already adopted pseudonyms. Plain young Howard Trafford and Pete McNeish were poetically and punkishly reborn as Howard Devoto and Pete Shelley, as in Percy the poet. They took the name ‘Buzzcocks’ from a catchphrase on a northern English TV series, ‘It’s the buzz, cock!’, as in ‘It’s great, mate!’

There were three versions of Buzzcocks. (Buzzcocks should never be mentioned with the definite article, though you may refer to them affectionately as ‘The Buzzers’.) There was the Howard Devoto- and Pete Shelley-led Buzzers, who self-released the seismic and seminal ‘Spiral Scratch’ EP in January 1977, one of the first truly independent records, and one of the roots of the Indie business. This was the first incarnation of the ‘Cocks. In one of the great artistic statements in all rock & roll, Howard Devoto left almost immediately after its release, stating that his work in punk was complete. Devoto went on to form existentialist New Wave greats Magazine.

The second Buzzcocks is the well known and beloved incarnation led by Pete Shelley and Mod rocker Steve Diggle: Buzzcocks as the singles machine that produced six hits in less than two years. But it is the third Buzzers — which is exactly the same incarnation as the second — who are now under the microscope of righteousness: Buzzcocks as weird, diffident, confused. Kraut-rocking, acid-drenched album makers.

Long live anniversary rock. On the 40th anniversary of Buzzcocks’ first two albums, Another Music In A Different Kitchen and Love Bites, both from 1978, Domino Records are re-releasing the pair of them, with no extras, on vinyl, which is what we used to call ‘a record’, and on CD too, if you prefer Eighties’ technology. Both of these beautifully strange artifacts have been remastered form the original ¼ inch tapes. This begs the question: What on earth were they re-mastered from before? Cassette? Eight-track cartridge? None of this should detract from the fact that you get a free Buzzcocks plastic bag with these reissues, which is very Seventies.

Richard Boon, punk player and Buzzcocks manager, once told me that by 1978, ‘things were getting commercially chaotic in Buzzcocks world.’ With four hit singles and two top 20 albums in 12 months, this is hardly surprising. Both albums are supreme, and supremely confusing. Half of Another Music In Another Kitchen is comprised of the Shelley/Devoto repertoire of ’76, sung by Shelley, and the other half is new songs. From the outset, where a sly nod to the classic two-note guitar solo from Spiral Scratch’s ‘Boredom’ segues art-rock style into Shelley’s fabulous put-down of macho dreariness, ‘Fast Cars’, it’s clear that Buzzcocks are waving goodbye to punky clichés. Unfortunately, Another Music In A Different Kitchen was received as exactly what it wasn’t — a too-late in the day punk debut album. It might all have ended there, had Buzzcocks not simultaneously turned into a singles machine.

A music journalist once asked me, ‘Can you explain what rhythm guitar is?’ Sure I can. If you really want to know rhythm guitar is, then just listen to ‘Orgasm Addict’, the first of the ’Cocks post-Devoto singles from 1977. The Les Paul Junior is a powerhouse of an electric guitar, just one hot P90 pick-up and two planks of wood glued together. Shelley and Diggle blast their Totally Achieving Les Paul Junior rhythm guitar attack, panned hard left and right by producer (and fifth Buzzcock) Martin Rushent. And that is Buzzcocks’ sound, as important in its own right as Pete Shelley’s witty and camp songs. It was as though Oscar Wilde had launched a coup d’etat against the Sex Pistols — and won.

‘Orgasm Addict’ was a mind blower, the greatest song ever written about the solitary teenage pursuit. Obviously, from the title down it was never going to be a hit. The follow up, ‘What Do I Get?’, should have been a smash but wasn’t. ‘I Don’t Mind’ almost pierced Britain’s top forty, and then fourth single ‘Love You More’ did. It’s a one-minute, 47-second hormone rush from Shelley’s first-person alter ego, the spurned anti-hero writing a suicide note to his soon-to-be ex-lover. Whether the lover is male or female just adds to the frisson.

Buzzcocks ’78 conjures images of Woolworths, sharing fags (cigarettes) under rain-sodden, wood-rotten bus shelters, snogging on the top deck of the bus, chip shops, wet Wednesday afternoons, Wimpy bars, being ‘chucked’ by girls called Julie, and then wanting to kill yourself. A lesser songwriter would have explicitly referenced all of the above. Shelley never did. He played it straight. Tellingly, comic actor Graham Fellows’ 1978 novelty pop hit ‘Gordon is a Moron’ — performed under the nom de punk Jilted John — did contain references to bus stop and being ‘chucked’ by Julie, and was sung in a camply over-the-top Pete Shelley impression.

‘Ever Fallen In Love (With Someone You Shouldn’t Have)?’ was the second and biggest Buzzcocks hit, and the closest they ever came to what musicologists of the future may call Cockmania. ‘Ever Fallen In Love’ was everywhere in ’78. Just two minutes and 39 seconds. Just two verses and eight lines, and the title sung over and over again. Catchier than a norovirus, and with a guitar hook that’s hookier than Peter Hook’s hat stand. On Thursday night’s primetime Top Of The Pops TV show, Buzzcocks were beamed straight into the psyche of 20 million British schoolkids. The next day they were the talk of the playground. ‘Who were those scruffy punks?’ ‘The singer’s a gay, y’know.’

Love Bites, Buzzcocks’s second album, was rush-released. The four Buzzers — Shelley, Diggle, bassist Steve Garvey and drummer John Maher — stare out from the sleeve in soft focus, looking blow-dried and tired. The words ‘Love Bites’ are written in a lipsticky Seventies’ teen-angst typeface, inside an embossed white love-heart. Love Bites looks like it might have been the Buzzers’ bid for the audience of Jackie, Britain’s biggest selling teenage girls’ mag. Side One is the pop side. It contains The Big Hit Single, no other Big Hit Singles and two of Shelley’s finest songs, ‘Nostalgia’ and ‘Sixteen Again’.

The second side of Love Bites is the experimental side. There is only one ‘song’, Diggle’s great ‘Love Is Lies’, with its bluntly poetic assertion that ‘Love is lager, as cold as ice.’ But it doesn’t sound like Buzzcocks. It sounds like Smokie, or perhaps a Sad Cafe demo. Elsewhere, there’s a short and inconsequential instrumental, ‘Walking Distance’; a barely-written guitar burn-up called ‘Nothing Left’; ‘Late For The Train’, a long, Neu-esque instrumental; and the extraordinary ‘E.S.P.’ ‘Do you believe in ESP?’ Shelley asks, then answers himself: ‘I do, and I’m trying to get through to you.’ He then plays a nagging guitar riff for five very long minutes, lost in wordless telekinetic absorption. Who knows what the Jackie girls made of all this.

Buzzcocks’ original life span was only five years. They recorded their three albums in the space of less than two years. After their pair of 1978 albums, there was one more album, A Different Kind Of Tension (1979), and then the motherlode: Singles Going Steady (1979), a compilation of all their great singles and equally great B-sides. One of the defining albums of the era, Singles Going Steady is proof positive of Pete Shelley as lovelorn poet genius, the Percy Shelley of pop. Presumably we will have to wait for next year’s anniversary before it is is re-released, and maybe, if we’re really lucky, with another plastic bag. In the meantime we have Another Music In a Different Kitchen and Love Bites, two slabs of orneriness from this extraordinary and all too short-lived group.

You have to seek out genius. You would have found it in Bolton Technical College, back in the mid-Seventies. You will find it now in the grooves of both of these unfussily reproduced LPs.

Luke Haines is an English songwriter.