Hitler, a hundred years ago 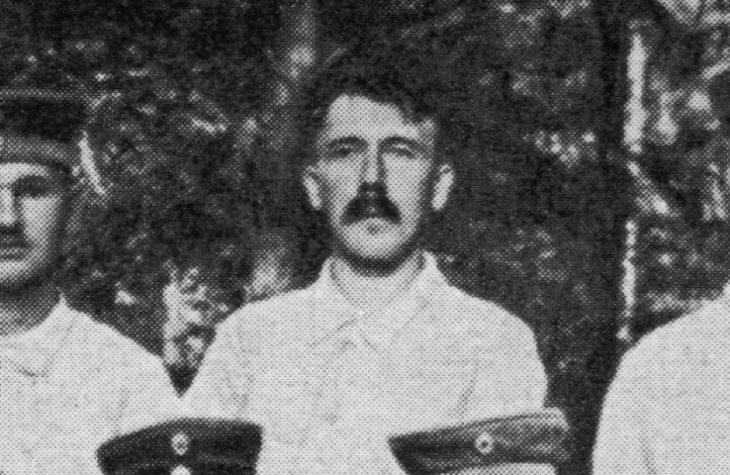 1918: Adolf Hitler (1889 – 1945) (back row, second from right) recuperates with his fellow infantrymen, in a military hospital during World War I. (Photo by Hulton Archive/Getty Images)

Hitler, a hundred years ago

When World War One ended at 11 in the morning of November 11, 1918, Winston Churchill was in his ministerial office near Trafalgar Square. At the first stroke of the chime, ‘from all sides men and women came scurrying into the street’ as the bells of London pealed.

‘Around me, in our very headquarters, disorder had broken out – doors banged; feet clattered down corridors; everyone rose from the desk; all bounds were broken. The tumult grew, it grew like a gale, but from all sides simultaneously. The street was now a seething mass of humanity. Flags appeared as if by magic, streams of men and women flowed from the embankment. They mingled with torrents pouring down the Strand. Almost before the last stroke of the clock had died away the strict, war-straitened, regulated streets of London had become a triumphant pandemonium.’

Meanwhile, a slender 29-year-old German dispatch runner named Adolf Hitler lay in a military hospital in Pomerania, in East Prussia. Four weeks earlier, Hitler and several other members of his regiment had been gassed, at Comines, south of Ypres. The runner hadn’t been gassed badly. His lungs were unaffected. Though his vision had darkened and blurred, and his eyes stung painfully and ran, his sight had been returning. The day before, on November 10, he and the other patients who could walk were asked to step into the hospital’s yard. A pastor had informed them the Kaiser was gone, and Germany was now a republic. The war was lost, and an armistice would be signed the following morning.

‘I could stand it no longer,’ Hitler later wrote. ‘Again everything went black before my eyes. I tottered and groped my way back to the dormitory, threw myself on my bunk, and dug my burning head into my blanket and pillow. Since the day I had stood at my mother’s grave, I had not wept.’

Did Hitler mean that he had been figuratively ‘blinded’ by the news of Germany’s defeat. Or had he actually lost his sight temporarily? Hitler had performed steadily as a dispatch runner, often under fire and shelling, for all four years of the war. He had never displayed symptoms of psychological breakdown before. Later, Hitler was to tell associates that he had gone entirely blind for several days on hearing of the Armistice.

If this is true, it would have been far from the first case of hysterical blindness during the war. London’s National Hospital for Neurology and Neurosurgery was filled with soldiers displaying paralyzed limbs, loss of voice, deafness, blindness, twitching, and full-blown ‘fits’ or pseudo-seizures — symptoms of ‘shell shock.’ Hysterical symptoms often occurred in parts of the body that actually had been injured; an arm with a shrapnel wound would become mysteriously paralyzed, and so on. In Hitler’s case, the fear of being blinded after exposure to gas may have made him more vulnerable to an episode of ‘hysterical blindness.’

Later, Hitler would relate how, lying sightless in Pasewalk after hearing of the Armistice, he experienced a near-religious vision, in which he was called to reverse Germany’s humiliation and restore its greatness. This, the birth of Hitler’s messianic sense of himself, became an essential part of the Führer myth. ‘And so I decided to go into politics.’

Hitler’s Armistice Day ‘transformation’ perplexed me too, until I read August Kubizek’s memoir The Young Hitler I Knew (1953). In 1905, Kubizek, a 15-year-old apprentice upholsterer who studied the viola at night, met 15-year-old Adolf Hitler in the standing section at the Linz opera house for a performance of Wagner’s Lohengrin. Hitler was wearing black kid gloves, a three-piece tweed suit and overcoat, silk top hat, and carrying an ivory-handled ebony cane.

Hitler, convinced that his schoolmasters had nothing to teach him, had persuaded his mother to let him drop out of school. He now stayed up all night, painting, sketching, reading biographies of great Germans. In the afternoons, he walked the streets of his hometown of Linz, Austria, sketching and re-designing the city. At night, complete with top hat and cane, he would go to the opera. There he met Kubizek.

The two of them saw each other almost daily for next four years. Their friendship culminated in sharing a tiny room for six months in Vienna, where Kubizek was at the Vienna Conservatory of Music and Hitler was ‘studying’ art. As Kubizek describes him, the adolescent Hitler considered himself to be Germany’s next great artist or architect, and a redeemer of the ‘bastardized’ Austro-Hungarian empire. There is no evidence that Hitler and Kubizek’s relationship was homosexual. During World Was Two, the OSS commissioned several analyses of Hitler’s personality during the war; all mention ‘repressed homosexuality.’ In Kubizek’s memoir, Hitler is presented as a misogynist and deeply inhibited heterosexual.

At this point, Hitler displayed in earlier form the traits that would become notorious in the adult: grandiosity, arrogance, intolerance of criticism, a craving for admiration, and a tendency to rant in monologues. These traits became muted as Hitler, selling his watercolor postcards in beer gardens, slipped into obscurity and near-poverty in Vienna and Munich. But the humiliation of the Armistice galvanized his personality. First, he became a political informant to his officers. Then, he was sent to an army program for political speakers. Next, he was asked to ‘instruct’ his fellow soldiers, and assigned to investigate and report on the raucous and radical politics of Munich’s beer halls. There, he imbibed the particular brew of ultra-nationalist race theory and revolution that he would import in spectacular fashion to the early National Socialist Workers Party.

Hitler recreated many aspects of his military experience in the party. His private army of stormtroopers shared the military fetish for uniforms and hierarchy, reviews and salutes, an overriding purpose and ‘ideal.’ The purpose, of course, was no longer limited to redeeming German greatness and avenging the humiliation of the Armistice and Versailles. War itself — he Darwinian struggle between different races and nations — became central to Hitler’s world-view. It became his life’s project.

Kubizek was Hitler’s first follower, and his first audience. After Hitler’s rise to power, Kubizek’s situation — a man whose entire life was shadowed, and compromised by, his boyhood friendship — turned out to be as interesting as the origins of Hitler’s own profound and complicated sense of grievance.

Fascinated, I went further: I re-wrote Kubizek’s memoir as fiction. I replaced Kubizek with a more intelligent, self-aware narrator, and kept the intense and eccentric Hitler as he was. This allowed me to explore Kubizek’s role as a pointedly apolitical man whose quiet complicity with Hitler’s ‘project’ is screened by his devotion to art and music and his boyhood friend ‘Adi.’

After Hitler became Reichschancellor, Kubizek wrote to congratulate him; Hitler miraculously received the letter and suggested they meet. In March 1938, on the day Hitler crossed the Danube to unite Austria and Germany, he and Kubicek were reunited in Linz. That August, Hitler took Kubizek to the Wagner Festival in Bayreuth, where Kubizek became a kind of minor celebrity, ‘The Friend of the Fuhrer’s Youth.’