The minefield of mime: ‘halt’ to an American signifies ‘hi’ to an Arab

Dictionary of Gestures: Expressive Comportments and Movements in Use Around the World by François Caradec reviewed 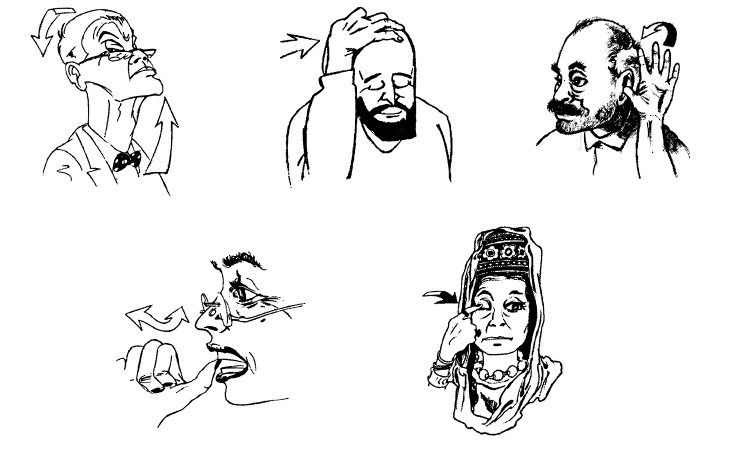 The minefield of mime: ‘halt’ to an American signifies ‘hi’ to an Arab

You may have read about this during the Iraq war. A group of local people approach an American position. A US soldier holds out his hand at arm’s length, palm outwards, in the traditional gesture of ‘halt’. The locals keep on coming. He repeats the gesture. They keep advancing. So he opens fire. The locals turn out to be civilians, not fighters. The Americans evidently didn’t know that this gesture, throughout the Middle East, is a friendly greeting. It means ‘hi’ rather than ‘halt’.

Very few gestures are universal, and François Caradec’s fascinating collection shows the way they vary around the world. It’s not a dictionary; more a thesaurus, divided into 37 thematic sections, each one dealing with a different part of the body, and organized from head to foot. He classifies them from the top down — gestures using the head, temple, ear, forehead, eyebrows, eyelashes, eye, nose, mouth, lips, tongue, teeth, cheeks, chin, neck, shoulders, armpits, arm, forearm, elbow, wrist, fingernails, hand, fist, both hands, thumb, each finger, torso, chest, hips, waist, stomach, buttocks, groin, thighs, knees, legs, and feet. The hand is the most versatile, with more than 80 gestures; the index finger more than 60. A remarkable 855 in all. Each is given a succinct description, a line drawing (by Philippe Cousin), and an interpretation — often an accompanying literary quotation showing how writers incorporate gestures into a story.

Sometimes the meaning of a gesture is obvious, but mostly we have to know the culture before we can interpret it. Many are so unconscious that there’s a pleasure of recognition when we encounter them in Caradec’s list — as when, in a pub, we draw a circle with our index finger above some glasses: ‘another round, please’. We forget we might have to explain it to someone from a different culture.

The opposite situation obtains when we fail to understand gestures that are not part of our own culture. Caradec will help you if you have no idea what your interlocutors mean when they pull on their earlobe with their thumb and index finger (‘watch out’ in Greece and Turkey) or wiggle it about (‘delicious’ in Portugal and Brazil); or if they place their index finger on their lower eyelid and pull it downward (‘I’m skeptical’ in much of Europe; ‘be careful’ in North Africa; ‘that’s crafty’ in Italy — or often, ‘she’s pretty!’)

And it will certainly help when he shows how the same gesture can mean different things, as in the Iraq situation. What does it mean to ‘form a circle on the horizontal plane with the thumb and index finger joined together at the tips’? For me, it means ‘perfect’, ‘spot on’. But I’d better not use it unthinkingly in Arab countries or South America, where it’s obscene — referring to the anus. (An extraordinary number of gestures turn out to be obscene.) In Japan it stands for a coin, and is a way of requesting money, often seen when haggling. In much of Europe it stands for zero, and thus means ‘pointless’ — the opposite of ‘perfect’.

This book is a personal collection, the largest of its kind I’ve seen, but it doesn’t claim to be comprehensive. Just because Caradec says that a gesture is used in place X doesn’t mean it isn’t used in place Y. And he doesn’t go into the choreographic arts (as in Indian dance) or deaf sign languages. But he does include some religious ritual and secret (e.g. masonic) gestures, as well as some that children use in games.

Caradec, who died in 2008, aged 84, provides an introduction, recording several historical studies and literary quotations, some in remarkable detail, and the publisher has added a useful index, so that you can find, for example, all the ways in which boredom can be expressed using whichever part of the body. Be prepared for some very long quotations, though. Rabelais, for example, has a thousand-word description of a gestural dialogue, and it’s all here. Also included is a lengthy extract from Georges Polti, in a little known book published in France in 1893, which asserts that there are more than eight million possible hand positions.

He might be right. There’s still a huge amount of tabulation to be done in this area of semiotics. Kiss variations alone are a puzzle. A few are illustrated here, but all Caradec can say when it comes to country variants is that they are ‘curiously codified’. And indeed I have to be instructed, in each country I visit, whether a cheek kiss is done once, twice, thrice, or more.

The study of intercultural gestures is not just a fascinating branch of semiotics, of interest only to linguists and anthropologists. It has huge contemporary relevance, helping to avoid misunderstandings in an increasingly multicultural society. This book could even save lives.