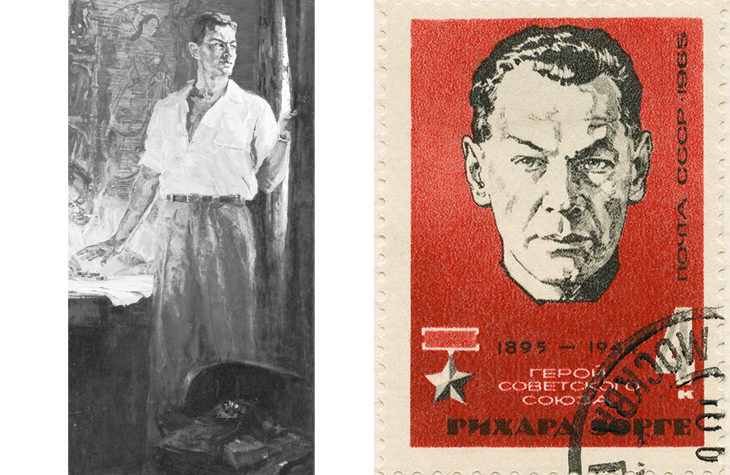 Interviewed on the Today program on March 7, a former executive of the gigantic Chinese tech firm Huawei admitted: ‘It is the nature of humanity to spy, to conduct espionage.’ A gold-plated incarnation of this impulse is the tall, craggy-faced German journalist who was arrested in his pajamas in his Tokyo house in October 1941. ‘I am a Nazi!’ he insisted to the Japanese police, who, before entering his study, had politely removed their shoes. On the sixth day of his interrogation, he finally broke. He raised his vigilant, deep-set blue eyes, which could have charmed the whiskers off Blofeld’s cat, and said: ‘I will confess everything.’

Over the course of 50 interrogation sessions, Richard Sorge removed the scabbard of ‘a slightly lazy, high-living reporter’, which had shielded him for 12 years, and revealed his inner steel: the blade of an unyielding communist and consummate dissembler, the only person in history in the reckoning of Owen Matthews, his latest and most thorough biographer, to have been simultaneously a member of the Nazi party and the Soviet Communist party. ‘No other agent had served Moscow for so well or so long.’

Sorge had always hid recklessly in plain sight, ‘seducing the wife of his most important intelligence source, crashing his motorcycle while carrying a pocketful of compromising documents, drunkenly praising Stalin to a roomful of Nazis…’ A later foreign correspondent, Murray Sayle, viewed him as the ‘psychic twin’ of Kim Philby, a textbook example of that rare species Homo undercoverus: ‘Ostentation is a kind of camouflage.’

Ignored and ritually humiliated by his Soviet spymasters, in death Sorge became ‘a dashing Soviet version of James Bond’. There are now more than 100 books on him, plus a film and a play. He has also lent his name to a ship, a Moscow street, a monumental bronze wall in Baku where he was born to a German engineer and a Russian mother (the house is now a sanatorium), and to the Sorge Society, which meets annually in Tokyo to pore over the sort of cove he really was. Smothered somewhere beneath all this fluffy mattressing is the elusive pea, as it were, of his true self.

His first wife, one of a legion of women he seduced with one look — ‘It was as if a stroke of lightning ran through me’ — and then abandoned, groused that: ‘no one, ever, could violate the inner solitude, it was this which gave him his complete independence’. His closest confidant in the spy rings that he set up in China and Japan was his radio man, Max Clausen, who told the Japanese police: ‘It is very difficult to explain Sorge’s personality’, since he ‘has never shown his true self’. Clausen tellingly concluded that Sorge was a man who could destroy his best friend for the sake of communism, but ‘if he were in a different position he would be a miserably small-minded person’.

Matthews has few illusions about his subject — ‘a bad man who became a great spy’ — or the challenge that he faces in exhuming him. A former foreign correspondent himself, he has a Russian wife whose family home outside Moscow was preserved largely thanks to vital information that Sorge sent back to the Fourth Department (regarding Japan’s preparedness to go to war with Russia). Drawing on the Soviet military intelligence archives in Podolsk, Matthews tells ‘for the first time’ the Soviet side of this eye-rubbing story.

The Sorge that painstakingly emerges is a papier-mâché German-Russian doll composed of tiny and frequently self-contradicting fragments. Sorge told his interrogator that if he hadn’t been a spy, ‘I should perhaps have been a scholar’ — yet the German press attaché in Tokyo regarded him as the ‘most uncultured fellow in the world’. To many, even to the terrifying Gestapo colonel directed by Reinhard Heydrich to ascertain if Sorge was a Comintern agent, he was impressively charming and plausible, ‘accepted by everyone, everywhere’; to others, ‘a real braggart’ of ‘unassailable conceit’, a raging narcissist and megalomaniac who waved a samurai sword and raved drunkenly how he was going to slay Hitler and become a god.

Down in the kitchen of life, Sorge had trouble in remembering his many aliases. He was ‘Agent Ramsay’ to his querulous bosses in Moscow; to his colleagues in Shanghai — where he was sent in 1929 — ‘Richard Johnson, an American journalist’. To the NKVD investigating him, he was ‘INSON’; to the Gestapo also investigating him, ‘Post’. To Eugene Ott, Nazi Germany’s ambassador to Japan whose imperious, gray-haired wife Sorge seduced, he was ‘the irresistible’. To his 30 lovers in Japan who succumbed to what one of them called ‘Richard Sorge fever’ — a blonde German harpsichordist, who leaped from her embassy bedroom into a flower bed to go on a 90mph motorbike ride with him — he was ‘Sorgie’. ‘His story reminds one of a man constantly trying out a series of savage caricatures of himself on the world.’

The key to Sorge’s success was that he didn’t steal secrets, he traded them. Ambassador Ott appointed him a freelance information officer at the embassy, giving Sorge unrivaled access to Germany’s military secrets, which he then photographed. To Ott in return, he passed on secrets from the spy that Sorge had placed as the most trusted adviser to the Japanese prime minister Prince Konoe, another ‘hormone tank’ called Hotsumi Ozaki. Sorge sent both invaluable troves back to Moscow, on one occasion concealed in 30 microfilms between the breasts of Max Clausen’s wife.

The key to Sorge’s downfall is that Moscow didn’t believe him, even though his information was accurate. A cocktail of intuition, luck and good judgment saved him from the bloodbath, when he defied the fatal recall of agents in 1937 for ‘new assignments’. Six of his chiefs at the Fourth Department were liquidated between 1937 and 1939, among the 681,699 executed by the NKVD, for ‘lipochki’ or ‘little fictions’. The incomprehensible logic of the purge exempted Sorge, but he lived from then on in fear of treachery by association. ‘This source does not enjoy our full trust,’ reads a memorandum from one of his new bosses, who suspected him of being ‘penetrated by the enemy’. Matthews admits to coming out in goose bumps to read the scrawl in red wax pencil with which Stalin himself defaced Sorge’s report of May 20 1941, warning of an imminent German invasion of Russia, and the likelihood that Japan would soon go to war with America. ‘Suspicious. To be listed with telegrams intended as provocations.’ Confusing Sorge for two of Sorge’s spies, Stalin dismissed him as ‘a shit’ who ran ‘small factories and brothels’.

Readers who hunger for some humane, informed reaction to the horror unleashed by Stalin, and to an articulation of Sorge’s own disillusion, will wait in vain. His last words before he was hanged in November 1944 were: ‘The Red Army! The International Communist Party! The Soviet Communist Party!’ To the end, he had hoped that Moscow would step in and save him, but the NKVD forgot his existence — listing him as having been shot in 1942 — and in their vicious ingratitude sent his Russian wife Katya into internal exile in Siberia, where she fell ill and died, not even informing her of his arrest. ‘I have lost hope that you exist,’ she wrote to him. ‘I hug you tightly. Your K.’ A clerk in the decimated Fourth Department inserted her letter into Sorge’s file, never to be sent.