Our lady of hope

Notre-Dame: The Soul of France by Agnès Poirier reviewed 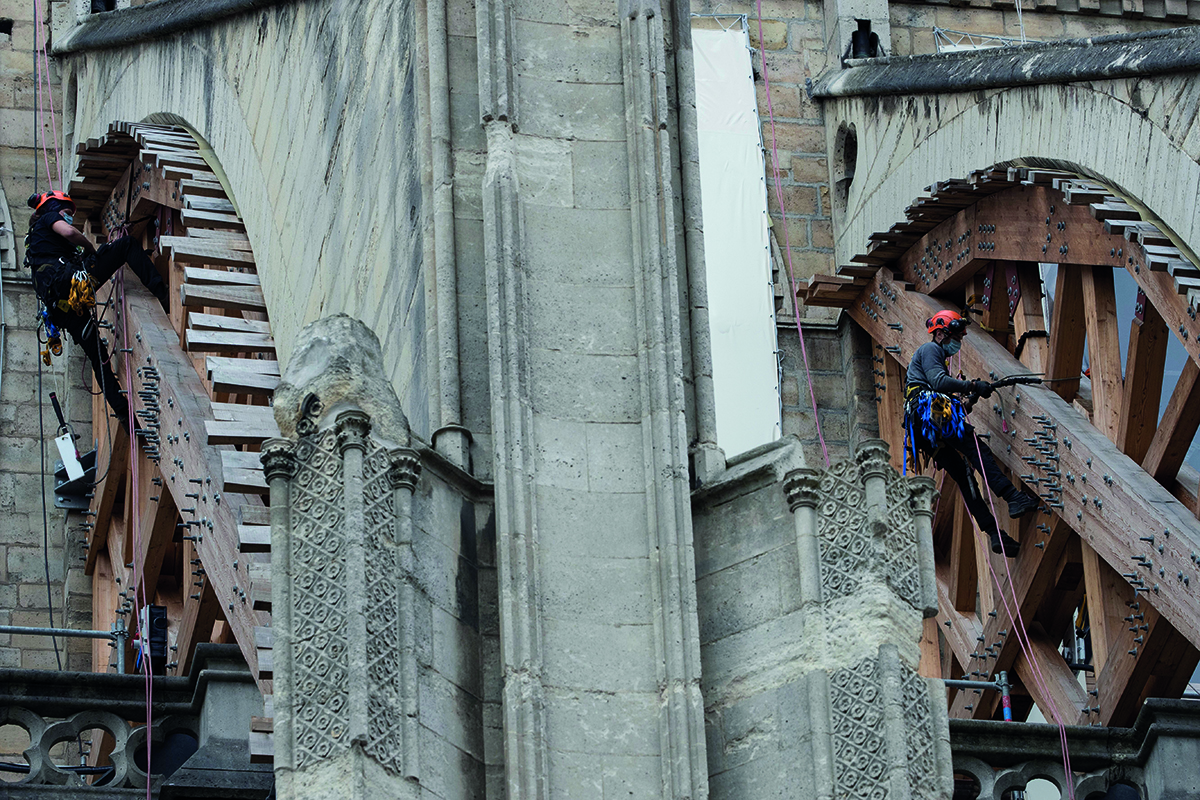 Our lady of hope

From the kitchen of her apartment on the Quai de la Tournelle in Paris, the journalist and broadcaster Agnès Poirier could see the bright yellow plumes of smoke rising into the sky. Notre-Dame de Paris was on fire, and suddenly, in that tourist-crowded, hyper-expensive ‘cradle of France’, nothing was certain — ‘democracy, peace and fraternity’ — anymore. The following morning, children living on or near the Île de la Cité took to school little plastic bags filled with blackened bits of roof picked up from balconies and pavements (as well as probably quite a lot of lead dust) which ‘dated back to the Crusades’.

Livestreaming of that apocalyptic conflagration taught millions of people around the world that a building can be mourned like a human being. ‘Notre-Dame is one of mankind’s greatest architectural achievements, the face of civilization and the soul of a nation,’ writes Poirier. ‘On 15 April 2019 she almost died as a result of human carelessness.’ (The current view is that the conflagration was caused by a short circuit rather than by a cigarette or a maniac.)

Though it recounts some of the chief events in which Notre-Dame played a role — the coronation of Napoleon, the decluttering demolitions of Baron Haussmann, the liberation of Paris — this book is not so much a history of the 850-year-old cathedral as an act of thanksgiving for its unknown medieval builders and its modern restorers. Poirier has interviewed several of those involved in the salvage operations. Their emotional involvement with the cathedral and its relics is at the heart of this engaging book. There are many hints of minor miracles — the gold cross gleaming in the charred and sodden debris of the nave, the word espérance (hope) cinematically visible through the dust on a leather-bound book lying open on the remnants of the altar.

This unavoidably Paris-centric ‘soul of France’ approach requires a certain amount of bell-clanging, stained-glass-dazzling distraction. The veneration of the common people for Our Lady of Paris was not always much in evidence. In February 1831, the vast Archbishop’s palace, its chapel, library and much of the south portal were irreparably wrecked in a popular uprising. According to the 19th-century restorer of Notre-Dame, Eugène Viollet-le-Duc, who refashioned the gargoyles from featureless lumps of crumbling limestone, ‘the walls of this side of the cathedral turned into a rubbish dump, and stone-throwing children smashed the portal which time had respected for 600 years’.

In Notre-Dame de Paris (1831), Victor Hugo captured the moldering, pagan weirdness of that incomprehensible ‘sphinx squatting in the middle of the city’. He correctly predicted that the printed book would sound the death-knell of that older form of writing — Gothic architecture. Is Notre-Dame, as Poirier suggests, still a symbol of unity in the 21st century? Was it ever? As it burned live on television, did France, ‘awestruck, realize how profoundly Christian its history is, even if it is buried under a century or more of secularism’?

For Hugo, the fossiliferous riches of the decaying stone palimpsest did not express a single form of religious belief: ‘The lesson of Notre-Dame could be summed up in the motto Tempus edax, homo edacior, which I would willingly translate thus: “Time is blind, Man is stupid”’. Notre-Dame is still being eaten away by pollution, and nostalgic religiosity cannot compete with veneration of the motor car.

Each period has made its own contribution to the cathedral. Poirier mentions the Disney family among the donors to the restoration fund, but not the scandal of 1996 — the year of Disney’s animated musical The Hunchback of Notre Dame — when the newly restored gargoyles were seen to have acquired the goofy, smirking cuteness of American cartoons (amply illustrated in Michael Camille’s study The Gargoyles of Notre-Dame). But then, as Camille observes, Viollet-le-Duc himself had been inspired by the cartoonists of his day.

Poirier makes a good case for replicating the spire created by Viollet-le-Duc in 1860. No one now seriously expects it to be replaced with a titanium prong, a beam of light or some other Macronesque statement of modernity. Fortunately, the ‘soul of France’ is not unanimous. There is veneration for the skill of the anonymous builders of Gothic cathedrals who knew, as Poirier points out, that the house of God would have to survive the occasional fire, but veneration takes a different form when the physical entity is at stake.

Jean-Louis Georgelin, the five-star general in charge of the commission which oversees the reconstruction, has to deal with a chief architect, Philippe Villeneuve, who refuses to contemplate any updating of the 19th-century addition to the cathedral. Disputatious, doctrinaire and passionate, the ‘soul of France’ will not be silenced: ‘I have told him many times, and will tell him again if necessary: he should just shut the fuck up. Only then will we be able to proceed serenely.’