Automation and the future of modern warfare

What role will micro drones play in the wars to come? 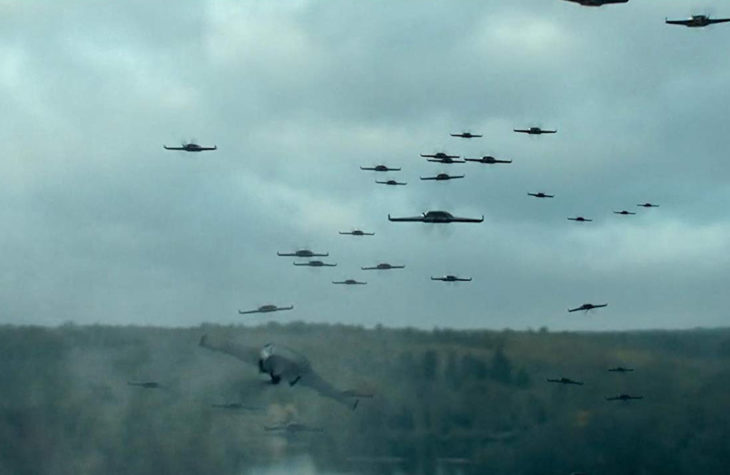 Drones in flight in the 2019 film Angel Has Fallen

Automation and the future of modern warfare

There is an epic moment in the latest Gerard Butler movie Angel Has Fallen where he gets to save the life of the US president (again). The bad guys launch a swarm of dozens of micro drones able to detect and kill dozens of Secret Service agents, destroying anything and anyone that might get in the way of their mission to kill the president.It’s a chilling moment in the movie that clearly demonstrates just how powerless mere mortals will be in the face of superior technology that can operate independently of any direct human control.As with so much in Hollywood these days, movie truth is remarkably close to a reality that has been prefaced since 1984 when the first Terminator movie appeared and suggested the idea of autonomous robots as terrifying killing machines.

That debate has now come center stage. Every major military power is now investing billions of dollars in new weapons systems that will launch and wage war at a speed and with a lethality that risks leaving their human masters as mere observers of a world war unfolding outside of their control. It is a dystopian vision that will have autonomous weapons, both on and off the battlefield, taking decisions in fractions of a second that can shape the course of a battle or even a war. Just as important, those same autonomous weapons have the potential to decide who to kill, how and when. Those same calculations would inevitably include making the tradeoffs between victory and defeat, civilian deaths, including women and children and all other forms of collateral damage. Would the right decision be to destroy a town to protect the ‘life’ and fighting power of a robot? Or would the humane decision that might perhaps trump the military calculus weigh as heavily on a machine as on a human?These issues of ethics and morality that are currently being debated inside the US Joint Chiefs of Staff have been a long time coming. Since the development of the first personal computers in the mid-1970s, all armed forces have been developing extraordinarily fast to keep pace with each other and with changes in the private sector. Today, every nation is dependent on computers to wage and win all levels of war. For example, the US aircraft carrier USS Nimitz has more than four thousand computers that power everything from navigation to weapons.The technology revolution has marched hand in hand with both a reduction in the number of political leaders who have actually experienced warfare and the ability of war to be waged at a distance. Today, only the very few special forces will ever see the ‘whites of their eyes’ before opening fire as William Prescott exhorted his men at the Battle of Bunker Hill in the Revolutionary War. This dangerous idea that technology can make war less of a brutal and very bloody business is a dangerous fantasy that makes robots especially seductive.Some military thinkers believe we are already too late in terms of deciding the limits of the autonomous war. The development of hypersonic intercontinental ballistic missiles means that American military leaders might have just five minutes to launch a retaliatory nuclear strike — likely not long enough for President Trump to even open the ‘football’ briefcase, let alone enter the launch codes.At a completely different level, swarms of micro drones are indeed being developed that can integrate multiple pieces of surveillance data, including social media and both facial and gesture recognition, to decide who is a threat. On that decision, which sometimes will need to be taken far faster than a chain of command can possibly integrate the information, will be decided the fate of men, women and children. The US Army is about to let a contract that will create a new generation of artillery that will use artificial intelligence to allow the projectile to select its own target without any input from command. The Marine Corps is experimenting with a project codenamed Sea Mob that allows for multiple unmanned vessels to operate in coordination with each other to protect men or robots taking and holding a beachhead. The Air Force has its own Sky Borg program that imagines a new generation of pilotless fighters that will be able to engage in aerial combat and attack multiple ground targets.Challenging as this environment will be, no decision will be taken in isolation. The enemy, whether a terrorist group or an army on the battlefield, will have access to very similar technology and will perhaps operate without any humanitarian or ethical constraints. To the ruthless robot may go the victory.Yet, the Pentagon has announced publicly that there will always by a human directly involved in the decisions made by a robot — an announcement that has been widely derided as hopelessly unrealistic. One way station on the road to fully autonomous warfare will be a halfway house where commanders might be able to control weapons system through a Brain Machine Interface or BMI, a kind of headband that might allow thoughts to directly control weapons. While research into the BMI is under way, it is going to be very difficult to achieve while autonomous weapons of all kinds will be much simpler to create.As the Pentagon wrestles with the morality of autonomous warfare, neither Russia nor China — never mind any terrorist group — has any such scruples. The latest intelligencer suggests that both countries are developing robots as fast as the technology allows to wage war on land, at sea and in the air. Indeed, China believes that autonomous warfare could give them a critical edge in any conflict with the United States.What has been both surprising and alarming about the current debate around autonomous weapons, is that it has taken place almost entirely in a vacuum. The development of nuclear, chemical and biological weapons was accompanied by a vigorous debate inside countries and between nations about just how such weapons should be used and how their proliferation could be controlled. The result was a series of international treaties and bilateral agreements that have worked well since the end of World War Two and have prevented the outbreak of World War Three.There has been no such debate around autonomous warfare and instead there has been a race to deploy robots faster than the next country. The result is a chaotic international environment where robots are already being deployed with no rules governing their use and no agreements to prevent their rapid proliferation to every nation on the planet.