Bomb attacks are now a normal part of Swedish life 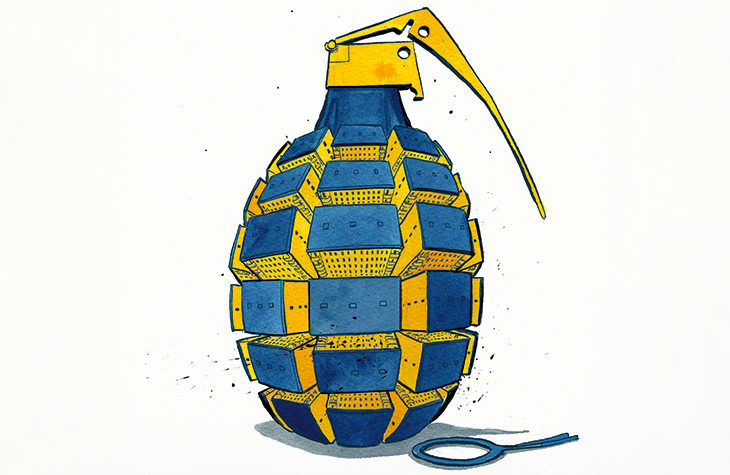 Bomb attacks are now a normal part of Swedish life

One night last week, explosions took place in three different locations in and around Stockholm. There were no injuries this time, just the usual shattered windows, scattered debris and shocked people woken by the blast.

The police bomb squad was already on its way to the first explosion in the district of Vaxholm when it had to turn around and prioritize the detonation at a residential building in the more densely populated city center. Residents whose doors had been deformed by the shock wave had to be rescued. The third target (seemingly unrelated) was a facility belonging to a Syriac Orthodox church, which had already been bombed twice in the past year.

‘Normalization’ is a term that we have come to associate with domestic violence: the victim begins to think of abuse as a part of everyday life. Explosions have become so normalized in Sweden that SVT, Sweden’s equivalent of the BBC, did not even mention the three explosions in the country’s capital on its national news program that evening. Instead, the main domestic story was the purported censorship of ‘big female bodies’ on Instagram. Apparently, we mustn’t be referred to as ‘women’ any more, but ‘female bodies’, lest anyone’s gender be assumed. The explosions were left to the local news.

To understand how Sweden arrived at this degree of normalization, consider the statistics: between January and June this year, more than 100 explosions were reported in the country, up from about 70 in the same period last year. A total of more than 160 suspected attacks with explosives were reported last year. There are no comparable figures available for earlier years because it’s such a recent phenomenon. Until recently no one would have thought of adding a column on bombings to the national Swedish crime statistics.

Wilhelm Agrell, professor of intelligence analysis at Lund University, has warned that the situation has become so dire that the integrity of the Swedish state is in jeopardy. ‘The state’s monopoly on violence, the actual token of a sovereign government, has been hollowed out bit by bit and no longer exists,’ he wrote a few weeks ago. ‘The armed criminal violence is having effects that are increasingly similar to those of terrorism.’

A new report from the Swedish Defense University warns that the clan structure of gangs in some immigrant areas is  putting the Swedish justice system under ‘severe stress’. In these parallel societies, the Swedish state is weak, witness intimidation is systematic and ordinary citizens are pressured to submit to clan rule.

Sweden’s gangs, which mainly operate out of the country’s socioeconomically weak immigrant neighborhoods, do not only use explosives to assert their dominance. Sweden had 45 fatal shootings in so-called criminal environments last year — a tenfold increase in one generation.

By contrast, Norway has fewer than three such shootings a year. According to the newspaper Dagens Nyheter, nine out of ten perpetrators of Sweden’s gang shootings are either first- or second-generation immigrants. The country has gone from having among the lowest rates of violent crime in western Europe to one of the highest. When it comes to bombings, no other developed country in the world which is not at war has experienced anything like Sweden’s epidemic.

At first, it was argued that these are just wars between gangs: awful, but avoidable if you just steer clear. But the bombings have now increased to such an extent that it’s impossible to ignore the collateral damage. The biggest blast so far, which took place in the university town of Linköping in June, demolished two residential buildings and damaged more than 250 apartments. A police spokesman called it a ‘miracle’ that no one was severely injured.

A bombing in the university town of Lund in September left a female student with severe facial injuries. She was passing by a shop on her way home after a night out when an explosive device detonated. Witnesses saw people jumping out of windows. Just weeks before, a young woman was murdered in an affluent neighborhood in Malmö, in an attack which police believe was aimed at her boyfriend. Karolin Hakim, a doctor, was carrying her young child when she was gunned down. As she was lying on the ground, the shooter put a bullet in her head. Her baby is now in a government protection program.

As inured as Sweden has become to gang violence, the country was shaken by this cold-blooded murder of a mother with a baby in her arms. Justice minister Morgan Johansson declared on Twitter that the state would chase Ms Hakim’s killer ‘to the ends of the earth’. But gang violence has severely strained police resources. A month after the murder, more than a hundred witnesses are yet to be heard. So much for chasing anyone to the ends of the earth: there weren’t even enough police to knock on doors around Malmö.

Only days after the murder of Karolin Hakim, another young woman fell victim to the gang wars. Eighteen-year-old Ndella Jack was killed as someone fired an automatic weapon into her flat in western Stockholm, probably aiming for her husband, a well-known figure in Stockholm’s gang scene. Less than a week after the murder, associates of Ms Jack’s husband were lured to a middle-class suburb of Stockholm, where they had been promised information about her killer. Shots were fired, missing the targets and hitting instead a taxi driver and a resident in a nearby building. One victim, also a university student, lost his sight in an eye after it was hit by a bullet.

When to draw a line? The Swedish government — a coalition between Social Democrats and Greens with the support of the Left, Liberal and Center parties — presented a long list of new policies this summer intended to curb gang violence. Its focus has clearly shifted to repressive measures, such as more effective laws to permit wire tappings, search warrants and CCTV surveillance. No one wants to be reminded of Sweden’s failed attempt at an ‘amnesty for explosives’ which was introduced at the end of last year, and which meant that those in possession of explosives could hand them in without facing prosecution. (Sweden’s police stations were plastered with posters warning citizens not to bring their explosives into just any police stations, only the designated ones.)

Three years ago, when the migration crisis was at its peak, Sweden started identity checks on the Oresund bridge with Denmark in the hope of stemming the influx of migrants. Now the Danes are starting to worry too. After two recent bombings in Copenhagen, both linked to gangs in the south of Sweden, the Danish government has declared that it will introduce checks at the border next month. Two Swedish nationals are being held in relation to a bombing outside the Danish tax agency.

It’s tough for everyone to come to terms with the new reality. Gang violence is intimately tied to the issue of immigration and failed integration, so those who highlight the problem have often been smeared as bigots. Only a few years ago Sweden’s leading daily, liberal Dagens Nyheter, came up with the phrase ‘safety deniers’, which it compared to looney climate deniers. The government has invested in a PR campaign for the ‘image of Sweden’ — but every grenade attack makes it trickier.

After a bombing in Malmö this summer which forced families with children to flee through their balconies, an eight-year-old girl was approached by the newspaper Sydsvenskan. ‘I don’t want it to be like this, I want it to be calm. I don’t want any bombs here,’ she said.