British government in chaos after rebel ‘no deal’ amendment passes

If you’re not confused, you haven’t been following closely enough 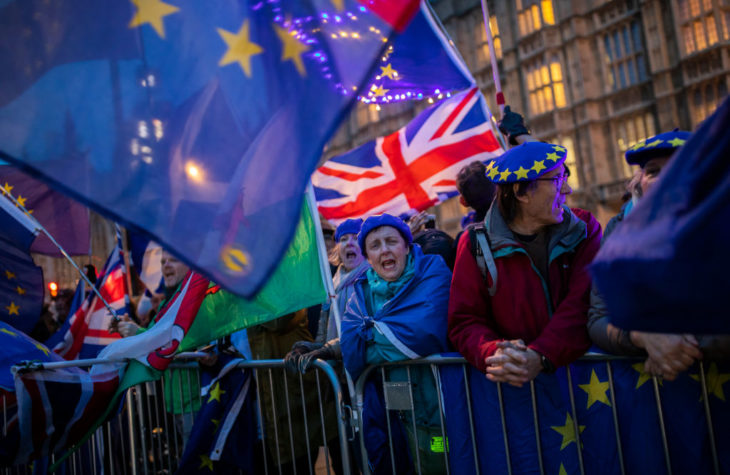 LONDON, ENGLAND – MARCH 13: Pro-Brexit protesters demonstrate outside the Houses of Parliament on March 13, 2019 in London, England. Last night MPs voted 242 to 391 against British Prime Minister Theresa May’s Brexit deal in the second meaningful vote. They will now vote today on whether the UK should leave the EU without a deal. (Photo by Jack Taylor/Getty Images)

British government in chaos after rebel ‘no deal’ amendment passes

Theresa May has just suffered one of her narrowest defeats in the House of Commons, with the government losing on Caroline Spelman’s amendment by just four votes. This amendment (which confusingly Spelman didn’t move herself, leaving that to Yvette Cooper) reads as follows:

Line 1, leave out from “House” to end and add “rejects the United Kingdom leaving the European Union without a Withdrawal Agreement and a Framework for the Future Relationship.”.

The implication of this is that Britain cannot leave the European Union without a deal in any circumstances, rather than the caveat offered in the government’s original motion, which said ‘and notes that leaving without a deal remains the default in UK and EU law unless this House and the EU ratify an agreement’.

Now, this isn’t actually legally binding: it’s a vote expressing the view of the House. But the problem that the whips have is that the government motion is now going to be voted on with Spelman’s amendment in place.

This has led to the government changing its whipping arrangements at the very last minute, asking Members of Parliament to vote against the motion that it tabled. They have imposed a three-line whip, and are trying to shepherd Tories into the correct lobby, panicking that some of them won’t have read the message containing the updated arrangements. MPs have contacted me from the lobbies to say that the chief whip and deputy chief whip have been accosting ministers to try to get them to vote with the new whipping arrangements, but that in at least one instance, these personal confrontations have failed.

If you’re not confused, you haven’t been following closely enough. But it’s fair to say that this attempt by Theresa May to bring clarity after last night’s defeat hasn’t exactly gone to plan.