How coronavirus could kill conservatism

Modern American conservatism is a funny hybrid animal. Can it adequately respond to this crisis? 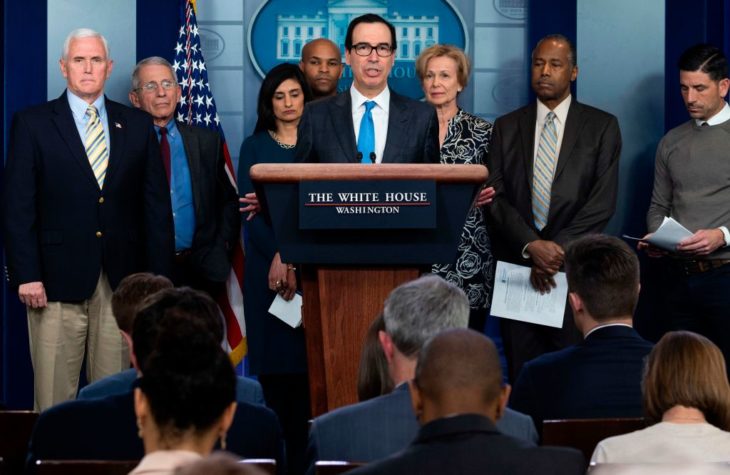 How coronavirus could kill conservatism

‘No corporate bailouts,’ says Michigan Rep. Justin Amash as lawmakers debate an economic stimulus package in response to coronavirus. Washington Post columnist Megan McArdle, usually somewhere in Amash’s orbit if not quite a fellow traveler, demurs. She wrote that the proper response to the outbreak is, much to her chagrin, ‘subsidize everything‘.

Libertarians are divided on coronavirus, an unusual event (the virus, that is, not intense disagreements among libertarians). Of libertarians, it has been said of late that there are none in a pandemic. We are all Andrew Yang — he of the universal basic income — now.

What about conservatives? My longtime TAC colleague Matt Purple says they too are ill suited to the current crisis, as are perhaps humans more generally. ‘We’re reluctant to give up what we know in favor of the unfamiliar, even when the authorities say we must,’ he writes. ‘And if we have to, we quickly seek to impose our habits again, like a template.’

Coronavirus is forcing political, as opposed to strictly temperamental, conservatives to confront anew their first principles for governing like nothing since…well, the election of Donald Trump as president of the United States.

It was under the previous Republican president, George W. Bush, that we last saw a wave of bipartisan bailouts in reaction to a major economic dislocation. This helped give rise, as much as anything done by the subsequent (pro-bailout) Democratic chief executive Barack Obama, to a more libertarian strain of conservatism known as the Tea Party.

Paleoconservative political theorist and columnist Samuel Francis posited that ‘Middle American radicals,’ the rebelling proletariat in his analysis, were much further to the right culturally than economically. The Tea Party seemed to turn this on its head. But not for long — the insurrection that actually prevailed against the stultifying Republican establishment was the populist, nationalist and not particularly libertarian Trump campaign.

What explains this stunning turn of events? Hypocrisy, the media explains. ‘Republicans suddenly find a bailout they can back‘, reads a recent Politico headline. Sen. Marco Rubio, a Florida Republican first elected thanks to the Tea Party despite his recent star turn against ‘free market orthodoxy’, offers an explanation in the story. ‘This is not like the financial meltdown, where you had banks that made bad decisions and asked the government to bail them out,’ he said.

How convenient! Except, leaving aside the chicanery and reactive policymaking undoubtedly going on, isn’t he substantially correct? This is not the product of malinvestment and the need for government assistance of some sort does not pose the same moral hazard. If anything is an exogenous shock to the economy that ordinary citizens and businesses have little power to protect themselves against, coronavirus is it.

Modern American conservatism is a funny hybrid animal. It seeks to conserve a political inheritance that is in large part liberal, at least in the classical sense. Yet its foundations are rooted in something greater and more permanent than procedural liberalism. If conserving the American people in the face of a truly grave threat clashes with libertarian ideology, it should be a no-brainer which should prevail. Coronavirus isn’t the first time conservatives have been asked to confront this dilemma in the Trump era, but it is the most important.

At the same time, this siren song has led conservatives astray before as well. We have been asked to discard constitutional punctiliousness in the face of various threats, leading to concrete follies like the Iraq war and more general ones like a federal government too financially overextended to meet its real obligations to the American people.

The great conservative temptation if Trump is defeated is to become generically antigovernment, leaving the country’s problems to be dealt with on progressive terms. The great temptation if he is re-elected will be to champion whatever the government does, as long as it is run by Republicans. Neither approach will be adequate to the long term, as coronavirus should remind us. Otherwise conservatives will be as scarce in government as in pandemics.

W. James Antle III is author of Devouring Freedom: Can Big Government Ever Be Stopped?