Coronavirus, Spexit and the remarkable rise of Vox 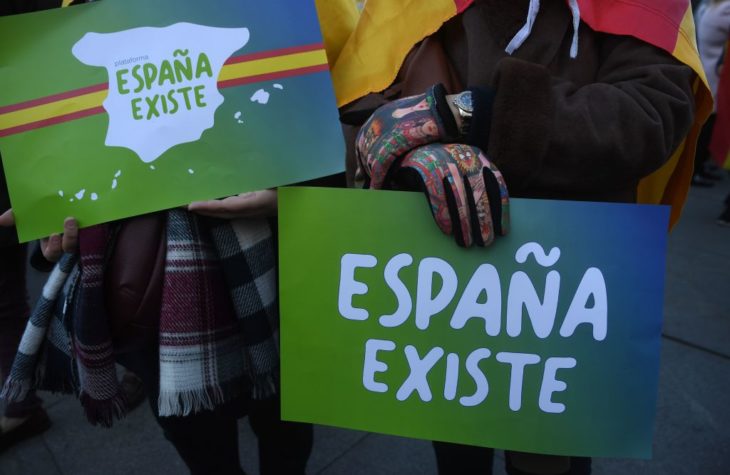 Coronavirus, Spexit and the remarkable rise of Vox

Eladio’s bar on the outskirts of Avila in central Spain has splendid views of the ancient town’s medieval walls. It also has a remarkable collection of Francoist memorabilia. Indeed, the whole bar is a shrine to the memory of the dictator who ruled Spain with an iron fist from 1939 until his death in 1975. It’s not just the photographs and posters; even the names of the tapas celebrate the Falange and the ‘glorious victory’ over the ‘communist hordes’ in Spain’s Civil War. No one who enters the bar is likely to be shocked by any of this; the facade is painted with a huge Spanish flag visible from afar. ‘Everyone knows what they’re coming to,’ says Eladio, the proprietor, with evident pride.

Not surprisingly the bar is very popular with supporters of Vox, Spain’s new hard-right political party. Vox is quite unashamed of its nostalgia for Franco and celebration of Spain’s dictatorial past. Founded in December 2013, it initially struggled to attract attention; in the 2016 general election it scraped a mere 0.2 percent of the vote. Memories of Franco were still too fresh and pride in the new democracy too strong for a far-right party, political commentators said confidently.

But by the April 2019 general election widespread indignation over Catalonia’s independence movement and the corruption scandals of the Partido Popular (PP), the biggest party on the right, had triggered a surge in support. Vox won 10.3 per cent of the vote, securing 24 seats in the 350-seat parliament. When it proved impossible for any party or coalition to form a government, a new election was held in November and Vox took 15.08 percent of the vote, winning 52 seats and establishing itself as Spain’s third largest party. 44 years after the death of Franco, the far-right was back.

Apart from its clean new image and uncompromising stance against Catalan nationalism, Vox also has numerous policies that many voters find attractive. It has no time for example for the regional autonomies (‘One government and one parliament for the whole of Spain’), claiming that the system adds an unnecessary layer of bureaucracy and causes strife (at present, for example, the central government and the Madrid autonomy are locked in bitter dispute over the best way to handle the health crisis).

Vox’s unashamed patriotism also wins it many friends. In an audacious stunt in June 2016, Javier Ortega, a senior member of the party, swam three kilometers (1.8 miles) across the open sea from the Spanish town of La Línea to Gibraltar, rendezvoused with supporters on a secluded beach, scaled the steep rocky slopes, and fixed a gigantic Spanish flag high above ‘the colony’. With Gibraltar’s security forces closing in, Ortega avoided arrest by running back down the hillside, plunging into the sea again and swimming back to Spain.

Meanwhile, Vox’s defense of conservative values appeals to the many in a traditionally Catholic country who resent political correctness. The party has no time for ‘radical feminism’ and plans to repeal Spain’s gender protection laws while defending bullfighting, hunting and traditional rural ways of life. It’s also takes a very hard line on immigration and is regularly accused of xenophobia. Vox also advocates low taxes and wealth and job creation.

Opposed to big government and bureaucracy and staunch defenders of national sovereignty, Vox’s criticisms of the European Union may be about to strike a chord. In the wake of the COVID-19 crisis, some Spaniards seem to be re-considering their traditional support of EU membership. Criticisms of the EU are now regularly expressed in editorials in local and national newspapers, on television and radio, and in the street. If the expected financial aid from the EU is deemed insufficient, comes with unacceptable conditions or arrives too late, Vox will be well placed to take advantage.

More generally, in the new reality which awaits post-coronavirus Spain, voters may feel that it is only natural to turn to a new party with a radically new approach. And if, as seems quite possible, they decide that they want ‘a party that puts Spain first’ (Vox makes no secret of its admiration for Trump-style patriotism), they will know where to turn.

Meanwhile, Eladio is about to re-open his bar. Before the health crisis, he reported that business was booming and that his customer base had suddenly begun to include many more young people. If that trend now continues, it probably won’t be the view of the medieval walls that’s attracting them.