What could divide the Democrats more than conspiring to stop Bernie?

The moderate 11th-hour dropouts are craven, not courageous 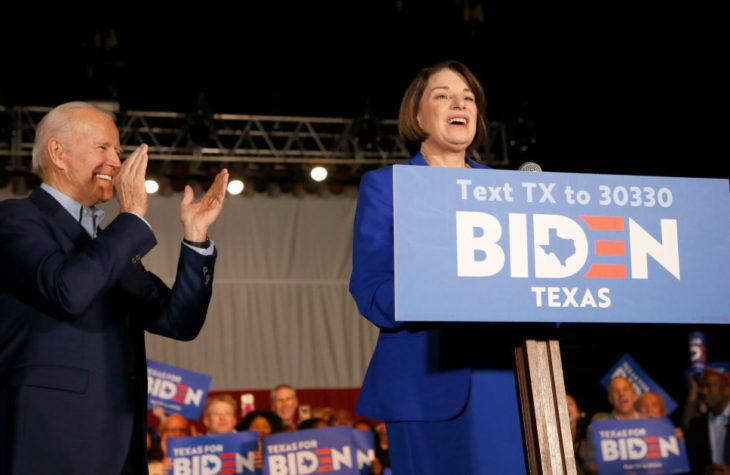 What could divide the Democrats more than conspiring to stop Bernie?

Perhaps the intense wave of establishment Democratic party consolidation around Joe Biden over the past 48 hours isn’t a concerted conspiracy — no smoke-filled rooms, no corrupt deals, no villainous blackmail schemes. But the Democratic party establishment (which we’re often told does not exist) is clearly making every effort to give the appearance of something conspiratorial going on.

Take yesterday, for instance. Pete Buttigieg meets for breakfast with 95-year-old Jimmy Carter (?), ensures the visit is well-publicized, then heads home to South Bend and pulls the rug out from under his campaign. Wait, what? Is this the same Pete Buttigieg whose aides just a few days earlier released an elaborate memo detailing his surefire path to a formidable delegate acquisition? Yet suddenly his Super Tuesday plans are scrapped, and the thousands of early votes already cast for him in California and elsewhere are effectively nullified.

We’re all supposed to pretend this is normal behavior? Because it seems a bit sociopathic.

I personally would never have voted for Pete. Nor would I have voted for Amy Klobuchar, who pulled the same 11th-hour dropout stunt today. But part of me still finds it disgraceful that these candidates would gut-punch their staff, volunteers, supporters, and voters in such a manner — hours before a major national election they’d been working toward for a full year — after both candidates gave every indication that they were going to actively contest. Instead of patting themselves on the back, shouldn’t Amy and Pete be begging for forgiveness, especially from those who already voted for them in Super Tuesday states — as it turns out, on false pretenses? (This highlights a problem with so-called ‘early voting’, a now widespread practice which sounds nice in theory but may be a very bad idea in the context of volatile, sequential primary races.)

Pundits today have been applauding the selfless courage of Pete and Amy, but what exactly about their actions is reflective of courage? They nuked their campaigns, in which many thousands of people were invested, on the basis of some vague strategic calculation about ‘uniting moderates’, whatever that means exactly. And they have to run around pretending that they are so very thrilled to be endorsing…Joe Biden? Does anyone in their right minds actually believe this shit? The performance put on today was so transparently phony and craven, it’s almost hard to process. There’s nothing heroic about what these two did; it just confirms that their campaigns were thoroughly devoid of principle all along. (Although that should have never been in doubt with regard to Amy and Pete.)

We are supposed to find impressive that establishment Democrats have suddenly decided to ‘work together’ and ‘unite’ around Biden, because the prospect of Bernie Sanders winning the nomination is just that unthinkable. I would certainly like a play-by-play of what Barack Obama has been up to for the past few days. Because it seems like he issued a memo on behalf of his old pal Joe. Probably not a literal memo: but whatever approximates that in Obama-land. (Reports indicate he spoke to Pete on the phone yesterday).

Because it’s hard to believe that such a rogues’ gallery of hollow Democratic power-brokers would have all sporadically had a change of heart today and endorsed Biden without a blessing from the Big Guy: Harry Reid, Susan Rice, Amy, Pete… even Beto O’Rourke was brought out for a reunion special tonight in Dallas. He pranced around onstage and tried his best to emote enthusiasm for…Joe Biden? Please tell me no one actually believes this.

The logic set forth by Klobuchar in her endorsement speech, which is no doubt shared across vast stretches of the Democratic professional/media class, is that Bernie would ‘divide the party’ and therefore hand Trump an easy win in November. Oddly, it doesn’t seem to occur to them that this coordinated establishment intervention done for the purposes of blocking Bernie will also inevitably ‘divide the party’, and probably more gravely so. Bernie’s most ardent backers are already absolutely incensed. They will not fall in line behind…Joe Biden. They just won’t. And yes, they are members of the Democratic party insofar as anyone who participates in the Democratic party primaries is a member. If you enrage and alienate them by appearing to rig the process against their candidate (for the second time) then you are inescapably ‘dividing the party’ and in all likelihood assuring a Trump victory.

Maybe the party is just too divided no matter what happens. That’s possible. The 2016 primaries were a watershed event because it split the party on ideological lines, rather than personality or temperamental lines, as was the case with the Hillary/Obama primaries in 2008. A rift like that can’t just be magically ‘healed’. Candidates love to talk about the ‘healing’ they will usher in, but few voters want to be ‘healed’ by a politician speaking in weird medical lingo.

‘Divisions’ aside, it is worth noting that Democratic party figures are better able to coordinate among themselves to achieve common political goals than Republican party figures. In 2016, the non-Trump candidates famously failed to produce anything like a coherent strategy to block Trump, and therefore he sailed to the nomination with a 30-40 percent plurality. The difference, I’d theorize, comes down to one key factor: prominent Democratic party figures are generally beloved by ‘normie’ Democrats. Obama, Biden, Hillary, etc. are still widely revered, and therefore they and their surrogates are able to engage in collective action without risking backlash from the party rank-and-file and the Democrat-aligned media. Conversely, Republicans tend to quickly sour on their leaders. McCain, Romney, the Bushes, etc. all became anathema to the GOP voter base once Trump entered the picture. So there was nothing they could credibly do to stop Trump.

It’s just different with the Democrats. Especially in the context of being an opposition party, so much of their energies and enthusiasms are poured into loathing Trump that they have little mental bandwidth left for tolerating intra-party divisions. They want desperately to ‘unite’, and the one obstacle in their minds to achieving that goal is Bernie. So they machinate to deprive him of delegates. Or at least that looks like the move here. To quote Donald Trump, ‘we’ll see what happens’.