What do elbows have to do with fighting coronavirus?

Digging up reliable etymologies takes a lot of elbow grease 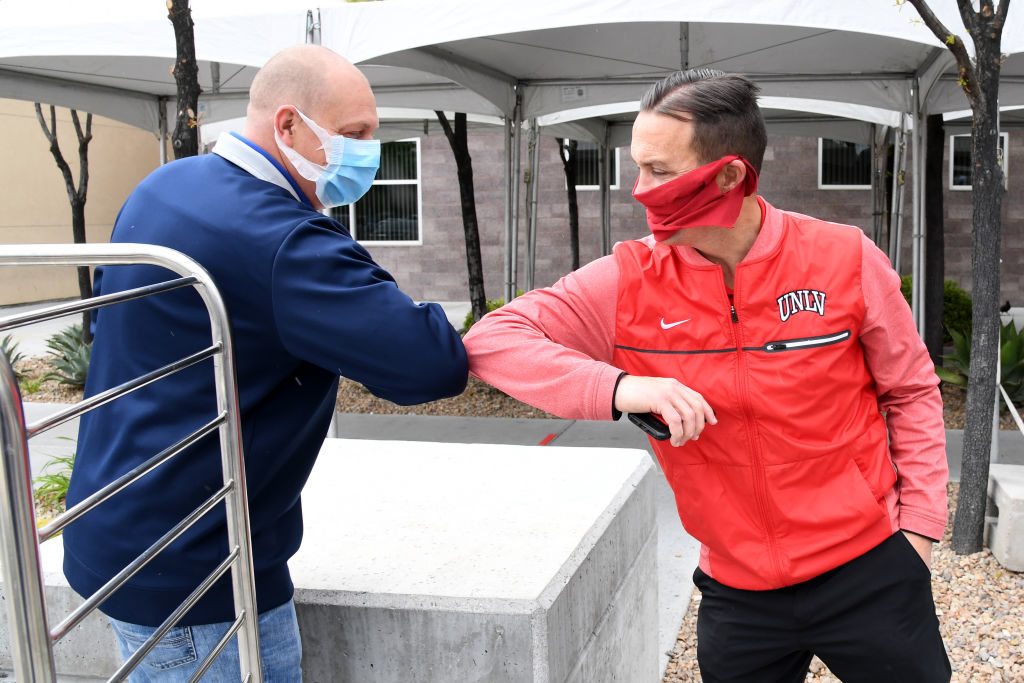 LAS VEGAS, NEVADA – APRIL 10: Ronald Roemer (L) from University Medical Center of Southern Nevada bumps elbows with UNLV Senior Associate Athletics Director for External Affairs John Gladchuk as he helps to deliver 1,500 cloth masks from UNLV Athletics to UMC as the medical community continues to battle the coronavirus on April 10, 2020 in Las Vegas, Nevada. UNLV Athletics student-athletes, coaches, staff and their families are making a total of 3,000 masks made out of T-shirts supplied by Nike and the Andre Agassi Foundation for Education for the hospital. The World Health Organization declared the coronavirus (COVID-19) a global pandemic on March 11th. (Photo by Ethan Miller/Getty Images)

What do elbows have to do with fighting coronavirus?

Before the COVID-19 scare I never thought that one particular Spanish proverb would come in useful. It goes: ‘Los ojos con los codos.’ This hardly seems to make sense, ‘Eyes with the elbows’, but the great 19th-century traveler Richard Ford explains in his Gatherings from Spain that the sun’s glare on the dusty land may inflame the eyes, which must never be rubbed with the hand, only with the elbow, lest ophthalmia and blindness set in. He also recommends blue gauze spectacles, which I must out.

Now, with the coming of the coronavirus, the public-spirited sneezer will use a pad of paper tissues in her hand, or sneeze into the crook of her elbow, rather than into her hand, which might then infect door handles, transportation-carriage poles or escalator handrails.

It is impossible to use the point of the elbow on the eyes; you can’t reach. I mentioned the crook of the elbow, but the Oxford English Dictionary seems to limit the reference of elbow to the pointed, angular part. The elbow is literally the bend (bow) of the ell (which gives us the obsolete measurement), though the Old English word had an n in it: eln. That word is related to Latin ulna (which we use technically for the bone beside the radius). What the inside angle of the elbow is called, who can say? My husband was useless when I asked him, going on about the antecubital fossa. Some call it the elbow-pit, but the OED is ignorant of this term.

Someone who hasn’t a clue is often said not to know his ass from his elbow. Richard Ford doesn’t give the acknowledged Spanish equivalent, but it is confundir el culo con las témporas — can’t tell his ass from his ember days. Ember days are more recondite than elbows, being quarterly fast days, to wit: the Wednesday, Friday, and Saturday following the first Sunday in Lent, Whitsunday, Holy Cross Day (September 14) and St Lucy’s day (December 13). The origin of ember is most straightforwardly found in the Old English ymbren, meaning ‘revolution of time’. But scholars tell us that ember might after all be a corruption of Latin tempora.

Digging up reliable etymologies takes a lot of elbow grease.