Europe’s culture clash: Macron vs Salvini is a battle over a continent’s soul 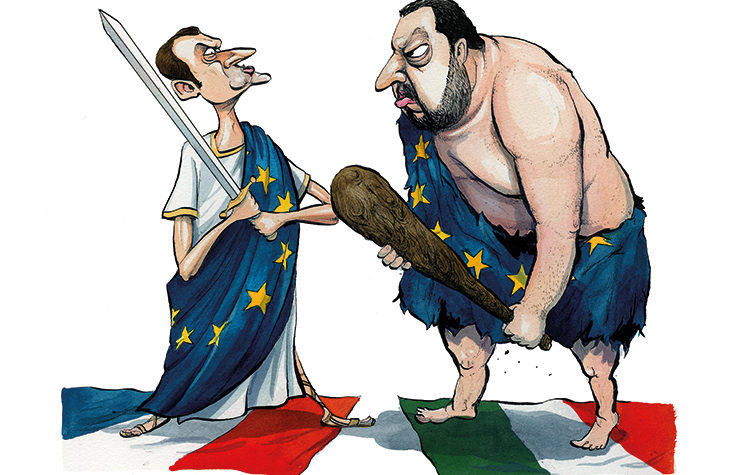 Europe’s culture clash: Macron vs Salvini is a battle over a continent’s soul

Two weeks ago Luigi Di Maio, Italy’s vice-premier and Labour Minister and the top politician of the Five Star Movement (M5S), appointed a new commissioner for the UN cultural organization Unesco. He chose the dog–whistling, bum-slapping sex–comedy actor Lino Banfi, star of How to Seduce Your Teacher, Policewoman on the Porno Squad and other films. The M5S was launched online by the 1980s comedian Beppe Grillo. It is run on the basis of a private computer operating system called Rousseau. Most Italians look at the M5S as either a breath of fresh air, a necessary gesture of defiance, or a ridiculous episode that will pass.

But you need a sense of humor for that. French President Emmanuel Macron has lately shown himself unable to take the Italian government in his stride. Perhaps it is because he is worried about France’s own protests. The so-called Yellow Vest marchers have been rallying against Macron’s embattled government for three months now. Di Maio travelled to the Loiret to meet the like-minded Christophe Chalençon, a sort of Yellow Vest renegade who has set up his own citizens’ software program and a new political party, and seems interested in collaborating with M5S in May’s European elections. Chalençon is given to blurting out various non-conforming sentiments on Twitter about the inevitability of civil war and the upside of military rule. Macron responded to Di Maio’s visit by recalling France’s ambassador to Italy for consultations.

Macron is Europe’s leading defender of Brussels and its ways. Politicians of his stripe generally attribute to the EU such miraculous powers of conflict resolution that you would imagine European countries would no longer even need embassies in their neighbors’ capitals at all. But Italy sees things differently. Italy’s government is a coalition of the anti-corruption M5S and the anti-immigration League. Ever since interior minister Matteo Salvini of the League began implementing his policy of turning away boatloads of migrants crossing the Mediterranean from Africa, Macron has become Italy’s most strident oratorical adversary. One Macron aide said the Italian migration policy made him want to vomit. Macron himself denounced the ‘leprosy’ of Italian and other nationalisms — although he has not so often invoked the ‘costs and consequences’ with which he threatens post-Brexit Britain.

As Salvini sees it, Macron is a hypocrite. Like Hungary’s Viktor Orbán in the summer of 2015, he, Salvini, has only been doing what EU treaties envisioned — defending the community’s external border. Macron, meanwhile, was hermetically sealing the Franco-Italian internal border to ensure that Italy bore all the costs and consequences of an illegal migration that it had done nothing to summon.

Who had summoned it? Salvini makes no bones about it: ‘Ask Paris,’ he said last summer. The present migration route opened up in 2011, when one trio of western leaders (France’s then president Nicolas Sarkozy, along with David Cameron and Barack Obama) overruled another trio (Silvio Berlusconi, Angela Merkel and Vladimir Putin) to destroy the Libyan government of Muammar Gaddafi.

This antagonism, it must be said, has been good for both Salvini and Macron. But Di Maio got lost in the shuffle. His reputation has suffered at the hands of the other two. Salvini’s agenda is to keep migrants out. It requires will and thick skin, and Salvini has plenty of both. Di Maio’s agenda is to fix an economy that has been delivering lousy economic results to everyone but the rich. That requires money.

Things were supposed to get better once Di Maio muscled a modest guaranteed-income measure into Italy’s budget. But the EU’s finance commissioner Pierre Moscovici would not sign off on an Italian budget deficit higher than 2.04 per cent. (Moscovici  is a Frenchman, although it is EU etiquette never to allude to the national origin of the various commissioners.) So Italy had to scale back some of Di Maio’s most popular programs. By contrast, in December, when Moscovici’s former fellow socialist Macron offered a set of measures that would push France’s deficit over 3 percent, Moscovici waved it through. He had a reason: Italy’s debt is higher. But Italians still resented it.

Although the M5S got the most votes in last year’s elections, it has been losing ground to the League almost daily. At regional elections in the Abruzzi last weekend, M5S saw its vote cut in half, falling under 20 percent, as the League became the top party.

France’s Yellow Vest protesters do have grievances in common with Di Maio, and they are having just as hard a time taking political advantage. They are a variety of ordinary people from rural France who are seeing not just their standard of living but also their culture destroyed around them.

Macron has tried to defuse their complaints in several ways. This includes passing budget-busting new government benefits, which have reversed overnight his plan to ‘modernize’ the French economy, much as François Mitterrand in 1983 had to reverse his plan to socialize it. He has set out on a tour he calls le grand débat, but which is better thought of as a round of squabbles, some of which have gone on for six hours. And he has encouraged a confusion between the yellow-vest protesters and vandals who often follow in their wake, using the excesses of the latter to crack down on the former.

Macron is optimistic enough to believe that populism is just a kind of rhetoric. If these uncredentialled citizens can learn to wield the irrational populist magic, why can’t he? This attitude may be what turned Di Maio’s visit — a run-of-the mill episode of political friction — into an institution-damaging scandal.

Macron’s party is the most Europhile in Europe. Di Maio’s is among the most Eurosceptic. But both lack allies at the continental level. Each is trying desperately to fix this problem as May’s European elections approach. That Di Maio would come to France to meet like-minded political agitators on the eve of the European elections is the most natural thing in the world. Until Angela Merkel was repudiated at the ballot box in 2017, Macron ran his government as a joint venture with the Germans. It was only a few weeks ago that he was sketching out plans for bilateral defense with Berlin, and he has not been shy about telling London how it should manage Brexit. That’s what the EU is.

Really there is no clash between Italy and France. There is a clash between the winners and losers of the process of ‘building Europe’. In France, in Italy, and everywhere else in Europe, there is a class war going on. This week in Spain, El País editorialized that the ambassadorial contretemps pits the ‘liberal and democratic values of the EU founders’ (Macron) against ‘authoritarianism’ and ‘-insurrection’ (Di Maio). If you’re prole-friendly, you’re with Di Maio. If you’re among the nobs of the information economy, you’re with Macron. That may be why Salvini calls Macron signorino — the young master.

The logic of the Maastricht Treaty is that eventually Europe will be a country that replaces the old nation states. If you think this way, as Macron day after day shows he does, then the institutions of the old nations are vestigial, soon-to-expire, worthless. Why protect or respect, for instance, diplomatic protocol? Why not use it to leverage yourself into a more advantageous position in the future order in which all politics will be continental? That is what Obama likely thought he was doing when he warned that Britain would have to get to the ‘back of the queue’ if it passed Brexit — he thought he was burning a relationship with a country that would not exist a generation from now, in order to win the trust of a country that would.