An open letter to Gillette from Godfrey Elfwick

‘In order to get through to the majority of men, you need to really talk down to them’ 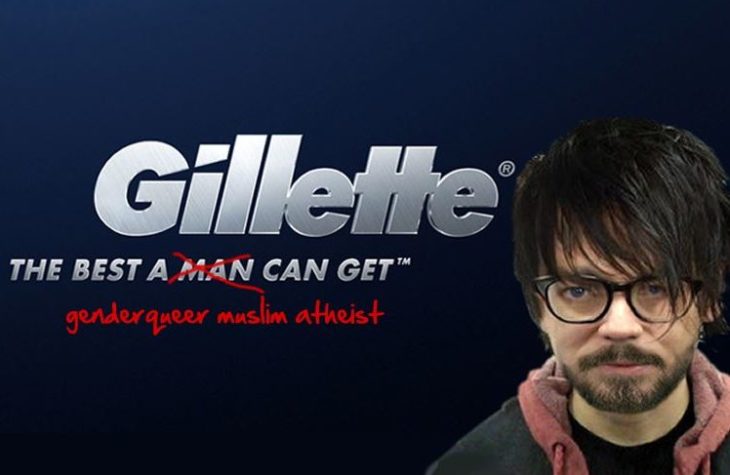 An open letter to Gillette from Godfrey Elfwick

I watched your latest advert and I must say, it’s a good start. However, I have concerns that it wasn’t patronizing enough. In order to get through to the majority of men, you need to really talk down to them, treat them as if they were tiny children, incapable of understanding the world around them. Only then will you gain their trust and respect.

To this end, I have taken the liberty of writing the outline for your next advert and I am willing to be featured in it (I will send you an invoice along with my PayPal details).

We open on a group of adult men playing some sport or other, Basketsoccer or whatever it is they do. In the corner we see a six-year-old girl looking vulnerable but also brave and defiant. The men begin to jeer at her, calling her horrible names (you’ll probably have to bleep most of them out to be honest). One of the men picks up the Basketsoccer ball and bounces it through the goalhoop, shouting ‘You can’t do this because you’re just a stupid SISSY GIRL!’ A few of them spit at her and another one takes off his shoe and throws it at her face. We see it bounce off her delicate but empowered forehead and the men collapse into cruel hysterics, patting each other on the back as they take it in turns to flip the bird at her.

The camera slowly pans in closer to the girl’s face as a piece of music kicks in, something poignant and emotional, I’m thinking ‘Time After Time’ by Cyndi Lauper, or maybe ‘Wind Of Change’ by Scorpions? A tear drips slowly down her left cheek as the camera pans in further until her tear fills the entire screen. [This sequence needs to continue for the duration of the song, so around three-four minutes].

We see a familiar silhouette appear, reflected in the teardrop and a gentle voice whispers into the deafening silence: ‘You got this’. The camera pans out on a mysterious stranger, who could this jaw-droppingly inspiring and enigmatic non-binary Muslim atheist be? It is I, Godfrey Elfwick! The young girl peers intently into my wise, benevolent face and sees the truth of my words. ‘Senpai, it’s you!’ she smiles a knowing smile and we both nod at each other. We turn and face the dozen or so sports men who stop their laughter (which has been going on for a full five minutes by this point) because they realize that some serious shit is about to go down [another music track kicks in, this time something upbeat and inspirational, I’m thinking ‘Holding Out For A Hero’ by Bonnie Tyler would work well here]. All the men look at each other with ‘Uh-oh’ expressions as the six-year-old girl and I begin to KICK ASS.

[There follows a five-minute-long professionally choreographed fight scene in the style of The Matrix – Neo vs Mr Smith, as me and the girl completely obliterate the toxic misogynists with our awesome skills. Half of them attempt to run away but I effortlessly catch up with them due to the high amount of protein my vegan diet provides, and administer a brutal takedown in the form of my own version of meditative yoga tai chi (available to purchase as a three-hour session on Blu-ray and DVD this March – $19.99)]

As the last of the men is desperately trying to crawl away, I look at the girl, ‘Be my guest,’ I say, gesturing towards the hapless male. She strides confidently over to him and leans down, her mouth level to his ear ‘I can do this BECAUSE I’m a sissy girl!’ she mic-drops at him before standing tall and kicking him in the face with a Dora the Explorer sandal. He collapses, unconscious. Camera pans over the pile of men, most of whom are sobbing.

Cut to: Me and the girl standing back to back, in the middle of the devastation, with our arms folded, looking directly into the camera. ‘Well,’ I say, ‘I guess that was the “closest shave” (I perform air quotes here to show that those words have significance) those men have experienced since the first time they used a Gillette Razor!’ At this, me and the girl laugh…as do many of the men as they slowly regain their strength to stand with us, apologizing for their behavior and promising to be better, as we fade to black. The Gillette logo appears.

Please let me know when you intend to begin filming as I have several End Capitalism protests to attend in the next few months.