Pericles for PM: Boris should forget Augustus and stay focused on his hero 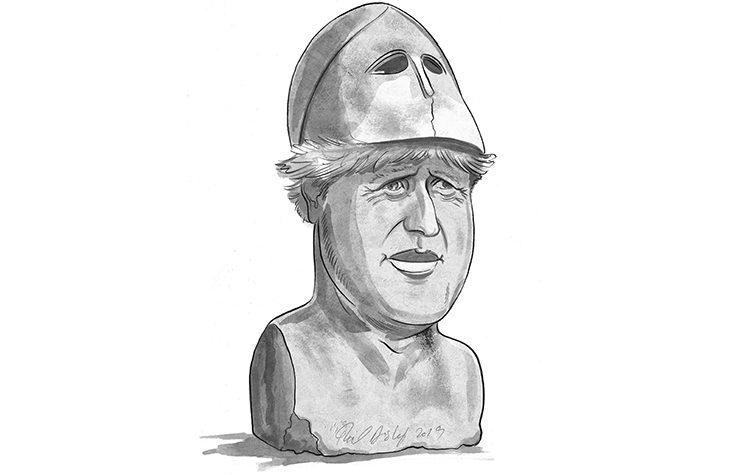 Pericles for PM: Boris should forget Augustus and stay focused on his hero

Boris Johnson is a gung-ho classicist. He has supported the subject throughout his journalistic and political career, is a generous donor to the charity Classics for All, and has a bust of his hero Pericles in his study. Indeed, he says his reading of Pericles’s famous funeral speech (431 BC) when he was 12 or 13 had a powerful effect on him, especially Pericles’s statement that ‘Athens is called a demokratia because it runs its house in the interests not of the few but of the majority’.

Last week, however, he turned into the Roman emperor Augustus to explain his sacking of 21 rebel Members of Parliament. Augustus, emerging as victor in 31 BC in the civil war against Antony and Cleopatra,  did just this, killing potential rivals and ushering in a long and peaceful reign. The PM must be hoping that by ridding the party now of the Europhiles, the internal (and eternal) civil war in the Tory party will finally be resolved.

In respect of this practical classicism, the British prime minister may be unique. Up till 1916, virtually all PMs had no option but to study Latin and Greek mainly as linguistic, not cultural, exercises at school. But those who suggest this education led them to see themselves as players in an epic battle, taking massive gambles to achieve greatness, would be mistaken. Take three of our most famous classicist PMs: Gladstone, Asquith and the other post-1916 example, Macmillan, all, like Boris, at Balliol.

William Gladstone (PM four times, 1868-94) was passionate about the epic poet Homer and wrote extensively about him. But he was no fan of Pericles. In his diary for 13 May 1826 he noted that he ‘wrote a speech on the politics of Pericles’ for a debating club, arguing that ‘they [Pericles’s politics] were neither useful nor justifiable’. But his biographers and his diaries otherwise reveal no evidence of the practical impact of his classicism on his politics.

So too with Herbert Asquith (PM 1908-16). When he finally attained cabinet level just before turning 40, he reached for a classical example to reflect on an earlier period of severe depression. He ascribed it to a Theban (in fact a Persian) in Herodotus, ‘that of all human troubles the most hateful is to feel that you have the capacity of power and yet again have no field to exercise it’. In his Memories and Reflections he lamented the passing of classical education, especially for women (‘what a falling-off we show’). But that’s all.

At least Harold Macmillan (PM 1957-63) managed to come up with one practical observation, based on an ancient example, about how relationships between allies might best be managed. Working for the Allied Force Headquarters (AFHQ) in control of the theatre of war in the Mediterranean from 1942 to 1945, he said to Dick Crossman, director of psychological warfare at AFHQ: ‘We, my dear Crossman, are Greeks in this American empire. You will find the Americans much as the Greeks found the Romans — great big vulgar, bustling people, more vigorous than we are and  more idle, with more unspoiled virtues, but also more corrupt. We must run AFHQ as the Greeks ran the operations of the Emperor Claudius’ (Claudius was notorious for making Greek ex-slaves his closest personal advisers). Whether they did so run AFHQ is not revealed.

The evidence, or lack of it, is clear. These men’s classical education acted as the backdrop to their political life; it did not inform it.

Our current PM, however, is different. He actively uses the ancient to enlighten the modern. So where might this lead him? If he wants to be seen as Augustus, ignorant accusations of fascism and dictatorship really would stick. Far better to stay with his hero Pericles. Herewith selective quotations, untimely ripped from his funeral speech.

Assume that Athens is the UK. The PM could take Pericles’s sentiment about ‘the interests of the majority’ to refer to the result of the referendum of 2016, and ‘the few’ (Greek oligous) to parliament — which is indeed an elective oligarchy — blocking the will of the 17.4 million. In that respect he could also cite Pericles’s observation that Athens’s form of government ‘does not copy that of our neighbors’ (the EU countries), but was more of an ‘example’ to them, i.e. the UK will not carry on voting till the EU is happy with the result.

Pericles described a free, open, merit-based and tolerant society under the rule of law, ‘securing justice for all on equal terms’ characterized by ‘fear of the authorities and the law’ and also of those ‘laws not on the statute books, which it is a disgrace to disobey’ (yes, PM?). So more coppers on the street; but also more respect for each other (yes, Mr Cummings?), including foreigners, who Pericles says were always welcome in Athens (yes, Home Office?). Pericles went on to praise Athens’s capacity to enjoy products from all over the world as much as home-grown produce. Free markets, then.

Pericles also insisted that Athenians were thrifty and practical in their pursuit of the good things in life, created wealth to put to use and not merely to boast about — we would call this investment — and did not regard poverty as disgraceful, just the refusal to do anything about it. So, on your bikes.

The point is that Pericles’s vision was that of a highly civilized man who transparently loved his people, a sentiment the PM has in spades. (Has anyone heard that from the lips of Corbyn or McDonnell?) Further, it is the vision of a man who was a winner, and nothing counted more than that to an ancient Greek, let alone to our PM, who has no intention of dying in any ditch.

A decent model, then, for a prime minister, though not perhaps for Dominic Cummings: Pericles’s adviser (as popular report had it) was his mistress Aspasia.