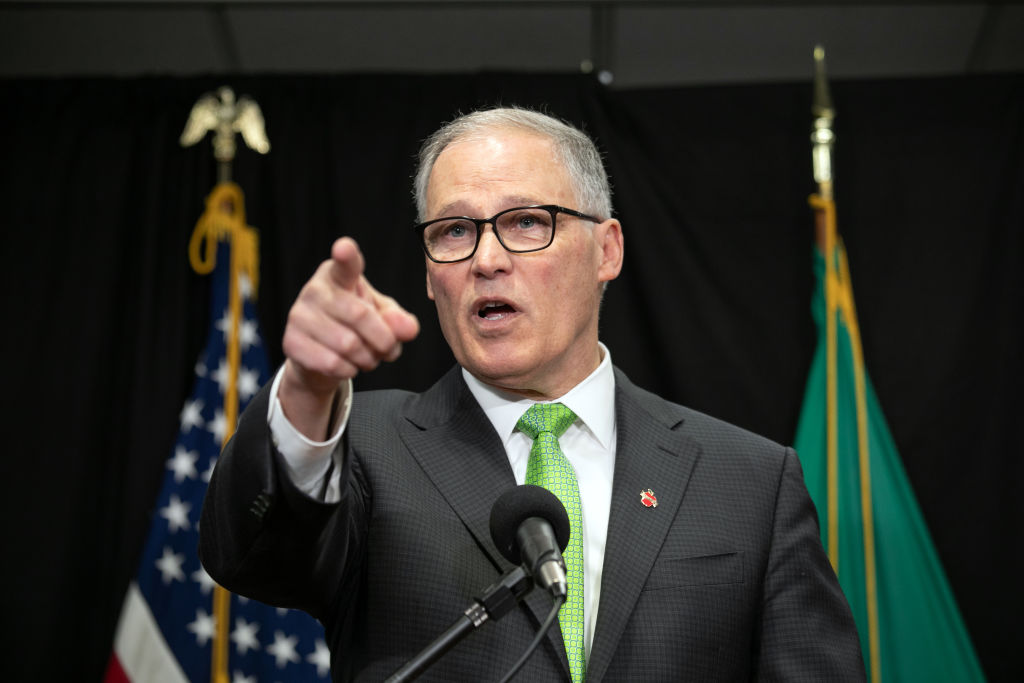 When the time comes to consider the question of America’s worst governors, it seems we’re somewhat spoilt for choice. From the swivel-eyed Gretchen Whitmer of Michigan to New York’s ubiquitous Andrew Cuomo and his never-ending victory lap for having overseen just 33,000 deaths — a reported 6,692 of them in his state’s nursing homes — media posturing would seem to be the rule, and sustained periods of selfless public duty the exception. But for sheer myopic self-regard, it would be hard to top 69-year-old Jay Inslee, the Democratic governor of Washington since 2013, who barring a political earthquake is almost certain to be reelected in next month’s election. Inslee is prey to all the corruptions of high office and is always on his guard against any foolish attempts by the citizens of his state to live their lives unimpeded by government fiat. Fortunately, the coronavirus saga has given him the opportunity to continually exercise his newfound power over almost the entirety of human life in the state. It’s like being back in the English boarding-school system of 60 years ago, with the critical distinction that the masters there, shuffling around in their impressively old thick tweed suits, worn whatever the season, at least appeared to have some idea of what they were doing.My own favorite Inslee story in this context came in June, watching him address a press conference in which he was asked to weigh in on the ‘CHOP’ police-free ghetto that had by then been up and running in downtown Seattle, in the full glare of the world’s media, for 36 hours. Perhaps the governor had been too busy issuing a whole slew of COVID-related decrees and proclamations — 23 of them in one day, he proudly announced — to notice that a sizable chunk of his state’s biggest city had been taken over by armed anarchists. ‘Well, that’s news to me, so I’ll reserve any comment,’ he said, before giving an awkward chuckle. It was one of those moments, familiar to any Inslee watcher, when you feel your eyeballs protrude slowly from their sockets, and then slowly retreat again. It’s this same potent mixture of ignorance and intrusiveness that surely lifts our state’s chief executive out of the realm of mere mediocrity and into the more rarefied sphere of utter ineptitude. Like Kamala Harris, Inslee is a former prosecutor who developed a social conscience in middle age. He was elected to the House of Representatives in 1992, but lost his seat in the Gingrich Revolution of 1994. He was back in Congress in 1999, and this time stayed for 12 years. Inslee will be remembered as ‘one of Washington DC’s most ardent advocates for combatting global warming’, according to the New York Times and also as the 2007 author of legislation to determine whether then-US Attorney General Alberto Gonzales should be impeached for having fired nine United States Attorneys whom he considered incompetent. In the end Gonzales resigned, although a subsequent inquiry by the Office of Professional Responsibility concluded that there was ‘no finding that the [nine Attorneys] were removed for illegal or improper reasons’.When it comes to doing his bit to save the planet, no one has been more stridently vocal, or as consistently wrong, as Gov. Inslee. He was all over the airwaves, characteristically issuing a raft of emergency proclamations and decrees, when in August 2016 a series of wildfires broke out around Spokane in eastern Washington. ‘Our forests and wild lands are under attack from climate change,’ Inslee shouted, before remarking on the ‘explosive conditions’ that the public in those parts had unwisely created for themselves. The local media uncritically reported Inslee’s prognostications, devoting acres of newsprint to the prospect of our all one day being incinerated in our beds, but somehow failed to find the space to mention two inconvenient facts that later emerged. One of the two major Spokane fires was in reality caused not by something called ‘climate change’, but by a tree falling against an inadequately-secured power line, which in turn ignited the surrounding brush. The other was deliberately started by a 22-year-old pyromaniac who was later sentenced to six months’ imprisonment for arson. ‘I really like fire,’ he informed a police officer.Previously content to restrict his prophetic warnings of mega-storms and catastrophic floods to his home state, in March 2019 Inslee announced his intention to stand for president in the 2020 election. His candidacy lasted all of five months. During that time it generated more than 300 pages of detailed papers on climate-change policy, but alas little in the way of public support. After dropping out of the race with less than the minimum threshold of 2 percent to qualify for the Democratic debates, Inslee told Vox that he was proud of his campaign, ‘even though it wasn’t successful in the traditional sense’, which is a bit like the quote from the manager of Spinal Tap after yet another disastrous concert that the band had decided to concentrate its efforts on a ‘more select’ audience in the future.

Inslee showed similar zeal when coronavirus struck in March 2020, barricading his state’s public parks and playgrounds, issuing a blanket stay-at-home order, and closing all schools. Following that initial burst of activity, he announced a series of four government-defined ‘phases’ by which individual counties would be allowed to gradually resume normal life. In Washington’s tangle of intersecting state departments and offices, as incalculable as any oriental sultanate, it can sometimes be hard to discern whether an individual currently finds himself subject to the strictures of Gov. Inslee’s ‘Modified Phase 1’, or the relatively more freewheeling ‘Amended Phase 2, With Exceptions for Limited Outdoor Recreation’, but one way or another it looks like being a depressingly long time before we’re free from Inslee’s relentless scolding of the public in general and his hapless white-skinned constituents in particular. Perhaps the last word on the subject should go to one of our much-abused local law-enforcement officials. Hours after Inslee announced a statewide mandate for his citizens to wear masks in public, Robert Snaza, the sheriff of Lewis County in southwest Washington, addressed a small but vocal crowd assembled in a church parking lot.‘In case you guys didn’t hear, the governor in his so-called wisdom has decided that we should all wear masks, inside and out,’ the maskless Snaza remarked, to appreciative laughter and applause. Even in these parts, there’s a limit to what people will put up with from their politicians. After some more in this satirical vein, Snaza concluded simply by telling his audience, ‘Don’t be a sheep.’ The ovation this time was truly deafening. The sheriff had clearly struck the most responsive possible chord.