The Fox News host applauds the president and slams the neocons 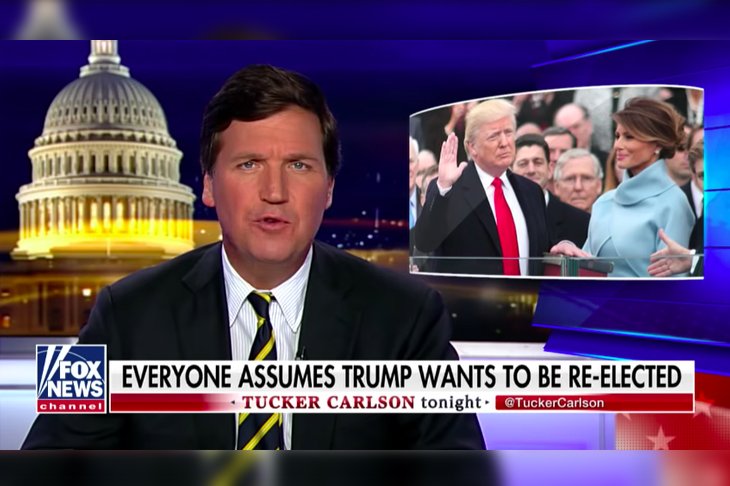 Fox News host Tucker Carlson is a man on a mission. His objective? To use his influence over Donald Trump to stop war with Iran. Last night, he used his opening monologue to praise the president for having canceled the military strike on Iran on Thursday. Almost directly addressing the president, Carlson said into the barrel of the camera: ‘Ill-advised wars are like cocaine: the initial rush raises your poll numbers, but the crash is inevitable, and horrible.’ He described Trump’s change of course as the ‘high point of his presidency.’

Carlson went on to launch a stinging attack on the president’s national security adviser John Bolton, calling him ‘a kind of bureaucratic tapeworm.’ It was electrifying television.

You can watch the whole opening monologue here:

Let’s type that out in full:

‘Try as you might, you can’t expel him. He seems to live forever in the bowels of the federal agencies, periodically reemerging to cause pain and suffering — but somehow never suffering himself. This is Washington in a nutshell: blunder into obvious catastrophes, refuse to admit blame, and demand more of the same. That’s the John Bolton lifecycle. In between administration jobs, there are always cushy think-tank posts, paid speaking gigs, and cable news appearances. War may be a disaster for America, but for John Bolton and his fellow neocons, it’s always good business.’

Who would have imagined, 10 years ago, that such words would be uttered by an anchor on Fox News primetime? Carlson’s predecessor, Bill O’Reilly, was a real enthusiast for flexing America’s military muscles.

Bolton won’t be happy. As the Iranians and others know, he bears a vindictive grudge. In recent weeks, however, there has been much speculation that the mustachioed mega-hawk is on his way out the Trump White House. He ‘may have gotten too far ahead of the president’s thinking’ on Iran’, a source close to the White House told Cockburn recently. Is this latest escalation with Iran his last stand?